I've made a few hundred knives, all fixed blades, but have regularly dreamed of a folding whittler.  there are dozens of knives out there called whittlers, only one or two have blade(s) shaped the way I like, and of those they are either too pricey for my pocket or have not-so-good reviews from people I trust.

I've bought a bunch of folders over the years, always intending to modify them to suit but have never changed a  single one.  There's more than a couple reasons for that.

First is the fear of damaging the pivots, or blade, or having the damn thing fold up on my fingers while grinding and damage me.  One solution would be to dismantle the knife, modify and re-assemble.  Little more work than I want to undertake, for a knife I'm not sure I'll like when I'm done.

Second is I assumed a grinder was the only way to reshape a blade; add overheating the blade to the list of fears above.

Third, I've tried to make a nail nick, which some mods will require, but have not been successful yet.  It would be a shame to let an ugly nail nick live on a nicely modded knife.

Reason 4, I've believed stainless steel blades to be inferior to high carbon, but all the HC folders were in the ozone price range.  Not gonna spend that much on a knife with a 50% chance of ruining it.

Last reason is darnit, I just like some of them like they are.  Couple of them have become regular carries for me.

A recent exchange on the WCI forum opened my eyes, and a stroke of luck may let this project move forward.  Couple of cronies on the forum suggested using files to reshape the blades.  Not sure why I didn't think of that, but it suits me just fine.  No grinding waste to breathe in, damage to the knife (and my fingers) can be avoided.  It'll take a little longer, but it'll be quieter too.

Same discussion touched on the differences, or lack thereof, between HC steel and modern SS.  Two guys say they have compared steels head to head, and found no difference in sharpening or edge retention (they mentioned 440 stainless).  That's impressive.  I'm willing to give it a try.

Then I got lucky, and found this: 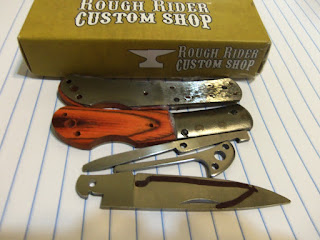 Rough Rider makes 5 or 6 knife kits, all parts included, assembly required.  I picked this one- RRCS5- for two reasons:  the barlow configuration with the (very) large bolster, and the lockback.  I consider a locking blade as a Darn Good Idea.  You can see I've sketched the blade rework in, I get to keep the nail nick on this first one.  Working the blade on a dismantled knife seems perfect.  No bolster on the back made me think I could reshape that end, but now that I hold one in my hands I see the rivet holes are going to limit that.  I've emailed RR asking if the blade is 440, as it is not marked and that info is not included in their description.  To date no response.

Stay tuned I will update when and if work progresses.