Came across the following, gotta love the World Wide Interweb.  Whittlings will be on display untill April 2014, I think- Museum is in Georgia, if you need a vacation.  I can only dream of my whittlings lasting 100 years- BfloBif

Special Photo
Robinson whittled and gave away toys such as this one to children in Sandy Springs.

Special Photo
Moses Robinson whittled toys, like this horse and plow, with a pocketknife


Moses Robinson made do with what he had when it came to art, and beginning Feb. 16, his folk art will be shown at Heritage Sandy Springs.

A lifelong Sandy Springs resident, the whittler was born in 1845 and worked as a farmer until he reached his 60s. To make use of his time, he started whittling. Robinson used a pocketknife to create animals, birds, soldiers, couples and other toys out of wood. He made miniature baskets out of peach pits.

“He ended up giving the toys away to kids, and that’s how he got famous,” said Kimberly Brigance, Heritage’s director of programs and historic resources.

What was left of Robinson’s collection was passed down through the years to his children, grandchildren and now great-grandchildren.

Over the course of a year, Brigance has identified five of these heirs, who have loaned her figurines and toys for the exhibit.

“Stuff is still coming in,” she said. “Members of the family heard about it and are bringing in their collections.”

She expects to have about 50 items on display.

“Most of these items are about 100 years old,” she said. “We’re hoping to get some donations to repair some and display later.”

Robinson’s work has never been on display before.

Acworth resident Bonnie Webb, whose grandmother, Annie Margaret Robinson Wootten, was Robinson’s youngest daughter, said she was ecstatic when she learned about the exhibit.

“The family has always been proud of them and felt that they provided a link to a distinct family personality that we would never have known so well otherwise,” she said.

“This has almost been like M.Y. (Moses) has used the carvings to draw his scattered family and the community of Sandy Springs together again.”

“All the little animals are smiling,” she said. “You get happy when you look at them, and you can tell he was happy when he made them. That he made them and gave them away is amazing.”

If you go:
o What: Wit in the Wood folk art exhibit 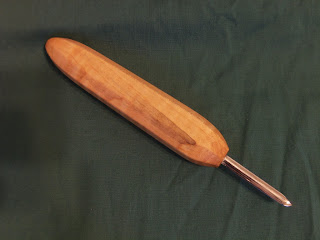 I had an opportunity to make a custom knife for a calligrapher, specifically designed for cutting feather quills.  It was an interesting project and a lovely piece of wood.  I can test the knife for sharpness, but have no idea how to test for quill-cutting ability.  I'll leave that up to the customer and wait for their report-
BfloBif

Posted by BfloBif at 8:09 AM No comments:

The Crazy Train Knife Project taught me a lot about making personna blade knives, and I've learned some more since.  I've been experimetning, looking for one or two handle designs I can make quickly, repeatedly and inexpensively.  I ocassionally make knives for a teacher to include in their beginners class kit, and for a club that tries to keep a few on hand for new members, I was lookig for a way to help speed up making small productions runs and make them more cost effective. Here's one: 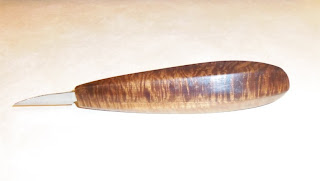 Nice fat Teardrop handle, actually a collection of flat sides- I hate it when a  knife rolls.
Here's the other: 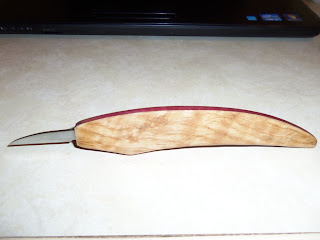 A slimmer Quill handle knife, narrow at the bck with a little more mass at the front end of the knife.
﻿
Posted by BfloBif at 1:33 PM No comments: