Got some time to work on the blade, I'm surprised at how soft the steel is.  It bends before it breaks, and can be worked with a file relatively easily.  I looked up heat treating stainless on the web, and found some surprises.  Older 300 series SS does not react to hardening and tempering, but it will work harden- hammer on it it gets harder.  Surprise!  Newer 400 series SS can be hardened and tempered, the site I found lists max hardness at 60 on the Brinell scale, whatever that means.  I can't find a conversion chart for Brinell to RC. 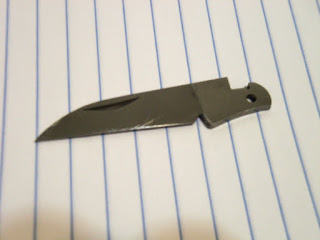 Here's the rough ground blade, it's close to what I want, though I might take a bit more off the width.  The shape of the blade and the length were dictated by my decision to use the original nail nick.  I'll save reinventing the nick for a later knife.  At this point the edge is square, about 1/32 inch thick- I haven't touched the bevels yet. 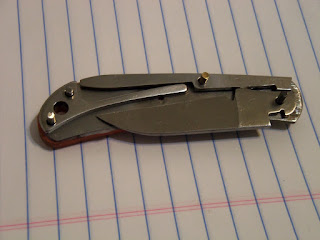 Here's a view I've never seen- interesting how the pieces nest together inside the knife, I think.  I temporarily assembled the knife on one side to look at how the open knife edge related to the handle- I like them to be (mostly) in line- and to make sure I didn't end up with the point of the blade no covered by the liners.

I'm debating about whether to try hardening and tempering the blade.  I'm used to harder in my carbon steel blades, on the other hand, I should test the factory blade for edge holding.