Edgar Poe, and the Eldorado of Whittling

"...Ride, boldly ride, the Shade replied, if you seek for Eldorado." 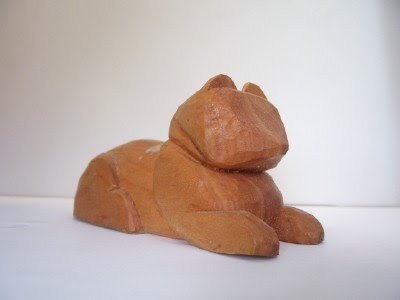 I don't know many poems, most of the ones I do know I couldn't post here, as least not in their entirety. This quote is from 'Eldorado' by Edgar Allan Poe.

So what the heck has that got to do with whittling?

As I write this blog and look at the things I have whittled over the last few years I can see evidence of progress in my work. I'm learning as I go, that's what whittling is; I spend time on other sites, looking at other's work, reading blogs about different carving styles, etc. 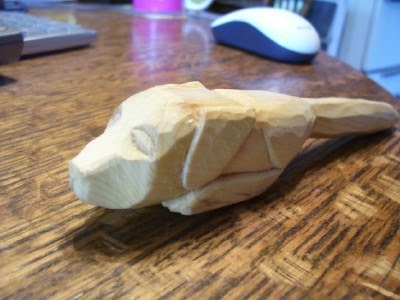 Most importantly, I keep whittling. You can learn ABOUT whittling by looking and reading, but you can only learn to whittle by whittling.

Comparing my older items like Sphinxcat, with some of my newer ones (and with some of the things I've looked at on the WWW)I can see two things i've done somewhat unconciously. 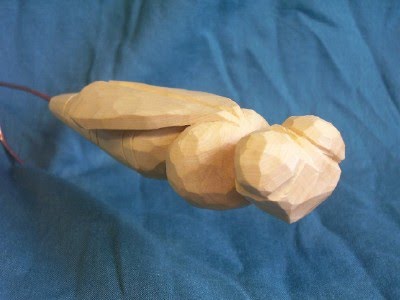 Both practices have to do with not removing enough
material. Sphinxcat's legs should be cut deeper,
made to stand out more against his body.
Dogpen's body still looks like the square blank
he was cut from. Both would look better if I had cut deeper, removed more wood.

So whittle BOLDLY is my new motto, and maybe chips on the floor could be a decorative element...


Gaily bedight,
A gallant knight,
In sunshine and in shadow,
Had journeyed long,
Singing a song,
In search of Eldorado.

But he grew old,
This knight so bold,
And o'er his heart a shadow
Fell as he found
No spot of ground
That looked like Eldorado.

And as his strength
Failed him at length
He met a pilgrim shadow.
Shade! cried he
Where can it be?
This land of Eldorado?

Over the mountains of the moon,
Through the valley of the shadow
Ride, boldly ride,
The shade replied,
If you seek for Eldorado
-Poe
Posted by BfloBif at 8:07 PM