Particularly the evolution of Gnome, ala BfloBif. So far I have whittled 3 gnomes, they were not on my list of things to do untill I was 'commissioned' to do one. I thought I did not want to do the same thing everybody else is doing, and I had no experience with the biped form. I was especially leery of my ability to whittle a face that did not look like it was inspired by Picasso. Don't get me wrong, he was a great artist and worthy of respect. I like my whittling to require the user to apply their imagination, just not that much... 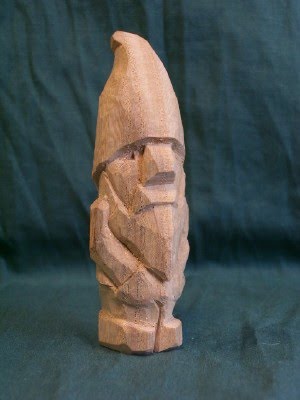 But I digress.
I whittled the first gnome and concentrated on the facial features- relationship of eyes to nose, eyes to ears, etc. Well, location of eyes, since he does not have any. He turned out OK, avoided the burn barrel, so he was a success of sorts. I ran out of wood by the time I got down to his feet tho, and it shows. Have you ever seen such a short pair of legs? They are barely long enough to reach the ground. 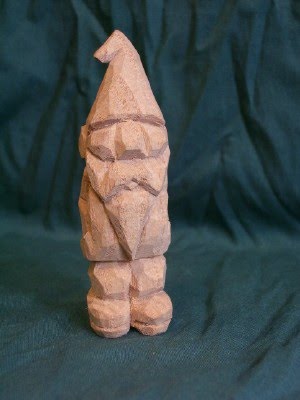 Gnome #2 is a little better, I think the face is
improved, he has a little more detail, still no eyes but he has cheekbones, and that's a start. I left a little more wood for the body and legs, so they look more in proportion. His feet actually look like they can support him, and possibly be capable of locomotion. There is still an issue- his shoulders ended up narrower than his head, I ran out of wood again, just in a different place this time.

While I was whittling these first two I had the beginnings of a picture in my head of what I really wanted. I find that my best whittlings, the ones I am happiest with, all start with a clear picture of where I want to go before I pick up a knife. I got my fat little pot bellied gnome this time, with rudimentary eyes even. I did not run out of wood, he doesn't look like he was made from a square block, his proportions are good, and he's smiling- definitely a success.
He's made of basswood, the first two are made of paulownia. For a finish (the pic shows him stained but not clear coated) he got one coat of Minwax natural, brushed on repeatedly and allowed to drain for a few minutes, I wanted the wood to absorb as much as possible, then a coat of Minwax golden oak, brushed on and rubbed off. I use a paper towel to remove as much stain as I can from the high spots only- don't push down into the cracks and crannys, I tried to leave the stain there to help accent the details. It worked out pretty good, I'm very happy with the result. I'll experiment more with this process, using different materials, the Minwax stains were handy so I tried 'em. They are a good product, and easy to use, widely available; some people will turn their noses up at them, they are wrong. For a top coat hell get a dip in a mix of polyurethane, mineral spirits, and tung oil I think (equal parts of each). Its a nice flat penetrating stain that offers good surface protection.
The point is, the more we whittle the more we improve, evolve, and so do our whittlings. After all, they are part of us, aren't they?
Happy whittling, BfloBif
Posted by BfloBif at 7:37 AM