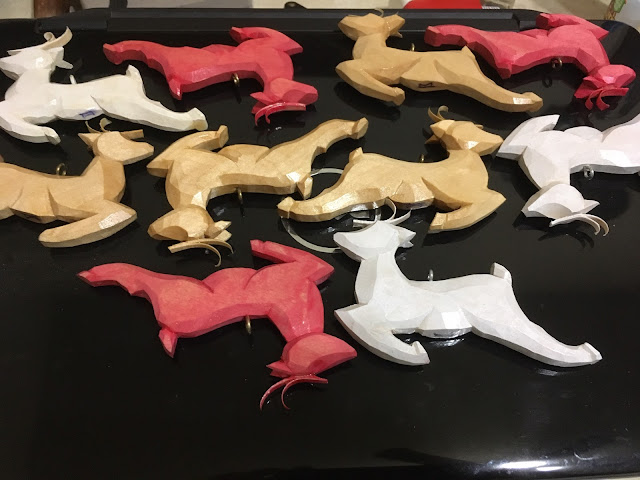 Looks a little like and Escher print, don't you think?

It's that time of year, the WCI Christmas Ornament Exchange (WCICOE) is here, I mailed out the first run this week.  Had to whittle a total of 18 ornies to put in the mail, plus some for the family, and the wife bushwhacked me by asking IF I Could Just Make Six More for her holiday party at work next week.  Thanks Hon, glad you like them of course I can.  I make sure I'm whittling when it's time to cook dinner, do the dishes, or go shopping...  ;)

Here's some pics of the ornies, and a bit of a show and tell about how I think about a little project like this.  As a woodworker, I always like the small production runs, I'd get a chance to hone the process- I'm a nut for efficiency.  Whittling a number of the same item is similar- I get to fine tune the order of cuts, etc etc.  How I whittle the last one is generally quite different from the process for the first, though they look (mostly) the same.

This isn't a tutorial- more like tips and tricks, and a little insight into the way I think about a project like this. 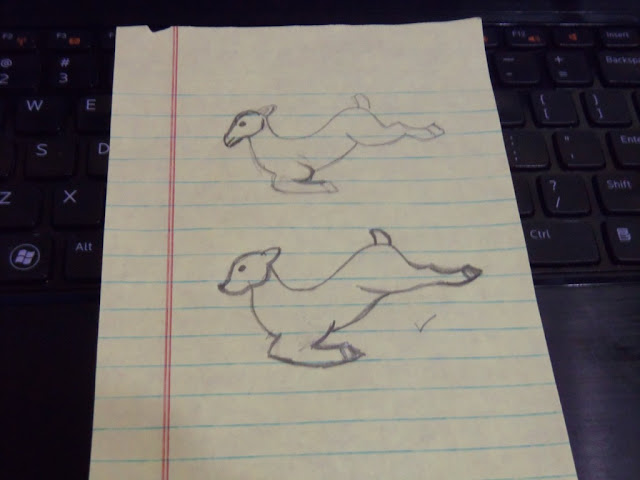 Everything starts with a sketch- or a tracing, or whatever.  I like to use lined paper and let the lines represent grain direction on the wood.  I rotate the figure to avoid weak grain construction, especially on thin parts.  Having the grain cross the legs would have two issues- cross grain is harder to whittle and more likely to break, either during carving or during use.  I got lucky with this pattern- there really is no whittling straight across the grain- almost everything is at a small angle to the grain, making whittling a bit easier.  The tail is the biggest issue- easy to break with the grain running across it like it does.  I broke more than one- stop what you're doing, find the piece, and get out the super glue.  This is where whittling multiples shines- set the item aside to give the glue plenty of time to dry and start another one. 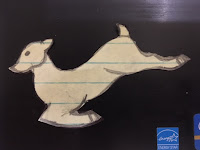 I cut the pattern out when I'm happy with it and trace around it on a piece of wood.  I just work on one at this point in case I find something I want to change.  In this case, I switched to a larger blank for the remainder of the project.

Once I have done a prototype and made any changes necessary, I make a more durable pattern, usually from a thin piece of wood.  I'll draw some grain direction lines on it, include some internal lines (whittling lines, not sawing lines) and the dimensions of the blank. 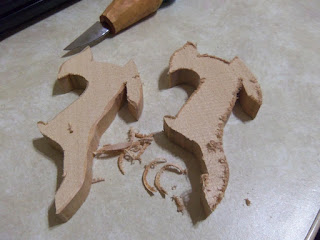 Clean up the bandsaw residue 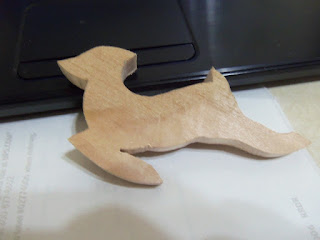 Taper the little guy thinner on the bottom half. 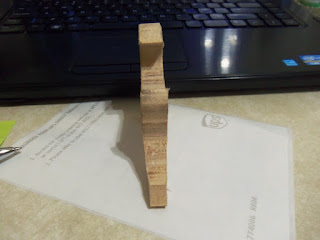 Taper both legs down their length- I'm looking for the feet (hooves) to be roughly square.  it's important IMO to make sure to disguise the fact that you started with a square piece of wood. 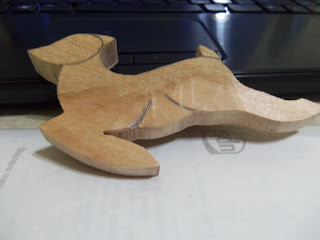 Draw the internal lines.  I like to leave a lot to the viewer's imagination, so my folksy style lacks detail and does not require a lot of planning. 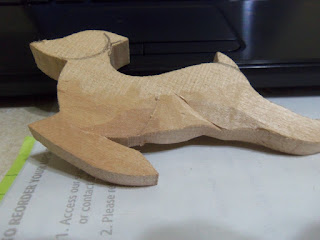 I like to identify the  major features and cut them in first.  Sometimes I have to whittle a few before I figure out what should be whittled first- that was the case here.  Those lines are done- I might have to touch them up at the end, but that is all. 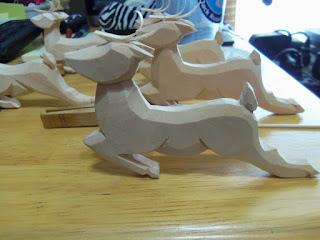 When I started thinking about this project, I had vintage tin toys in mind- kinda thin, two mirror image slightly shaped pieces that might have been soldered together, or joined by tabs-and-slots.  The mostly continuous bevels are how I tried to emulate those toys.  No eyes, no lips, no real nose- just bevels and surfaces that let you know where they go.  It's an active pose- the legs and the swept back ears suggest these guys are flying.  I like the way the flat bevels reflect the lights on the tree. 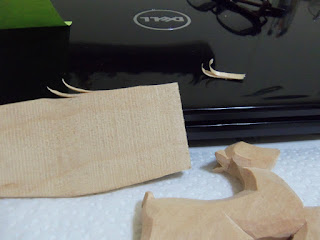 Antlers- I chose wood.  Thought about metal, but I wanted antlers that went both forward and back from the point of attachment, and just didn't come up with a way to bend and attach metal (or wire) antlers.  Couple connected shavings off the edge of an 1/8" piece did the trick.  Super glued to the head, and when that set, the entire antler was coated with super glue.  I never painted over SG before, it worked out OK. 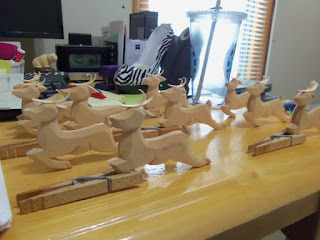 Some reindeer stood on their own, some needed help.  Springy clothes pins held them up while the glue dried. 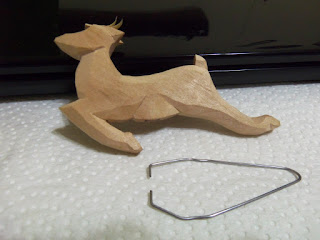 These little guys need to hang on the tree, so I needed to figure out where to place the screw eye.  Bent a biggish paper clip into a set of pincers.... 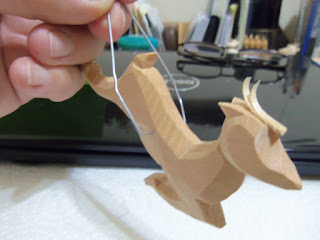 ...so I could suspend them from different points looking for the balance I wanted.  Had to put the antlers on first to make sure they didn't overbalance. 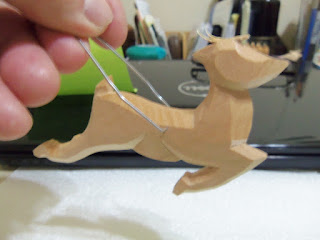 I chose to have my reindeer fly pretty much straight.  Up or down were options- landing or taking off- but I chose straight.  Once the balance point was found by moving the pincers back and forth, I penciled in a little line on the critter's back to mark where to set the screw eye.

After that, it's just paint.  I like water base, they soak in nice and clean up easy.  If I haven't sanded, which I never do, the water base doesn't raise the grain.  I mix acrylic paints, the cheap ones found in the Wally World craft aisle, with gloss water based polyurethane, thinned with a little water.  It gives me a good color and cross polymerizes inside the wood.  These guys got a coat of clear PolyU on top, and are ready to go.

I've already decided on next year's ornament, tho there's plenty of time to change my mind....

Carve Diem, if you can- Buffalo Bif.