Now look at that fancy title- there's at least 50 cents worth of words in there, and worth every penny.

So, I've been carving for 2 or 3 or so years, this past spring I stumbled across the Flat Plane forum on WCI, and got hooked. It took a while to figure out what the style entails, I did not find much in the way of definitions or directions- plenty of examples to be had though. I wrote a blog in April 2010 on FP, it's short and incomplete, take a look anyway if you haven't already.

So from here on in your are going to get my interpretation on what I've seen and thought for the last 6 months as I tried to practice Flat Plane Whittling. My first attempts sucked, yours may too, it takes time and practice to change the way you look at what you are whittling. Keep at it, it's worth it.

Some say Flat Plane carving, I say whittling, because the fp style is done with a knife only. If you've been whittling a while, you know that every knife has limitations- there are some cuts you can't do with one knife, or one knife does one cut or set of cuts better than another. There's no sanding, no gouges, no vee tools. So the first rule- embrace the knife and it's limitations.

FP doesn't try to imitate reality, but rather represent reality. Legs and arms aren't round in section, they are faceted, typically 6 or 8 sided. Clothing folds are represented by vee cuts and points, not flowing rounded surfaces. An elbow or knee might be a vee cut in the back and a 'mountain' on the front. Shoes aren't rounded, they're squares with the corners knocked off. Eyes are usually a chip cut or a combination of chip and vee cuts- no lids, eyeballs, irises, pupils. Simpler is better. Rule 2- imagination required.

Rule 3- symmetry is not required. Legs should not be 6 equal facets, or 3 pairs of facets. Make some smaller, some wider, taper them unevenly or reverse the taper top to bottom. Angles don't need to be the same, or even close. We don't want to make tinker toys, or robot men.

Last rule for now- not all cuts in FP are flat! Surprise! Round is fine, and you'll need it. Concave cuts will be limited by your knife (see rule 1), convex curves not so much.

So lets add in some visual aids. You've all seen Roman Gnome- currently in Maryland, working for his keep I think. 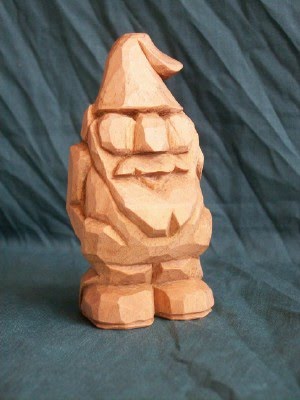 His pockets are defined by a couple vee notches, not symmetrical, not the same size. The toes of his shoes use 5 or six cuts to turn a half circle, they're not the same size (just close) and they don't match. The front half of his hat is composed of three planes. His beard is faceted, the section below his mouth is curved tho, and the only 'detail' in his beard is the off center vee cut in the bottom. His knees are sharp angles, the legs are separated by another vee. His cheeks aren't rounded off, neither is his nose. he doesn't even have eyes, just deep pits under his hat, but you wouldn't doubt they are there, would you? The curves I did use are finished with a single knife cut, some of the facets on his shoes are curved, the bent over point on his hat is curved. 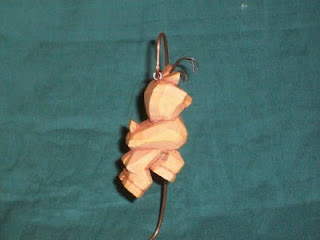 Here's a little reindeer I made a bunch of, I think I took FP to an extreme on him, particularly on his legs. Its easy to see rule 3 tho- take a look at the thigh section (?) of his back legs. They are made of 4 planes (which would be 8 sides on a full round leg), none are the same size, tapers reverse from plane to plane, and the angles are not equal. Below the knee is a vee cut that defines both the bottom of the knee and the top of the ankle (reindeer do have ankles, right? and thighs?) Another vee cut defined the knee and top of the ankle on the front of the back leg. Hooves are all 8 facets, the only thing that separates the hooves from the legs are a series of vee notches- two knife cuts each section.

So you see I didn't whittle a leg- I made a series of vee cuts that give the impression of a leg. It's the location and relation to the rest of the piece that makes you sure it's a leg. Ditto for the hoof- heck, I'm not sure what a hoof looks like, I have no chance of pulling off realism there! 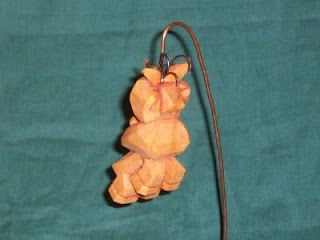 His eyes are little triangular chips, his nose which you can't see, is a pair of vees. His two front legs are separated by a single vee notch from chest to toes. His head is round, but still faceted- think of a cardboard box you over inflated- two sides and the back with the 'corners' knocked off.

I do keep symmetry from the left to the right side of these guys- I do my best to make the front legs the same, but I do not measure. They're close enough. The same for the back legs, and the left & right sides of the body and head. The ears are another story- they're not even close, but I like it like that.

Most of these notches are the result of a series of cuts- not one big chip taken in two cuts (I tried that, and broke a couple little guys). The last cut, thin as newspaper, is a single cut to leave one smooth plane. A sharp knife leaves a smooth finished surface.

Well, its not exactly a tutorial, more of a discussion with examples. I hope its enough to get you started thinking about flat plane whittling, and maybe try to work some of the principles into your next piece.

More on this later, its bedtime now-