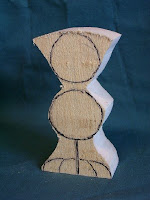 This is just the way I make these guys, certainly not the only way. I got the idea from Will Hayden, see the links section and look for Lesson 4, I think, in Will's Classroom. Actually take a look at all the lessons in the classroom, and don't forget to bring your knife to class. I've made a bunch of these, tho it is Will's idea I don't make them quite the way he does. Basswood blank is 1"x2"x4", since I've made a few I have a pattern to try and make them come out a little bit alike, and I rough saw the outline. I've sketched in suggestions for the shapes of the head body feet and legs. 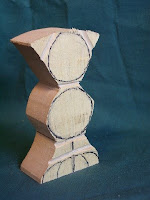 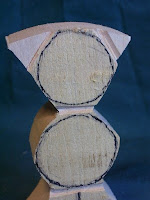 I took a top-down approach to this guy, not my usual method. I tend to jump around, and whittle whatever strikes my fancy from second to second. 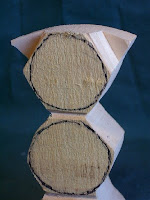 At the notch for the ears, remove material on the ear side of the cut till the entire ear is flattened to the depth of the cut. Cut another notch and flatten it some more. My goal is to remove the front half of each ear. 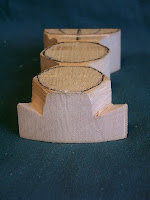 I undercut the front face of the ears, this surface is close to finished. 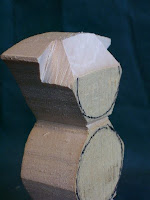 Bevel back the forehead. Starting point on the front of the face is just above the halfway point,to a point just in front of the top of the ears 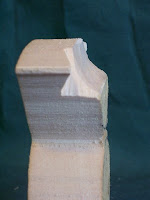 I curve the upper part of the face with a twisting motion of the knife, cutting first along the top of the nose and curving up to finish the cut vertically at the forehead. The first cuts only give me a small eighth inch wide curve, but a shaving at a time will get to the point in the photo. 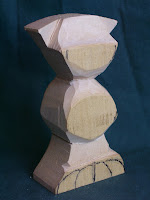 Have at the chin body and legs. My goal here is a body like a golf ball, sometimes a neck and sometimes none, legs that taper from the bottom to the top 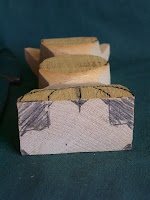 Sketch in the feet from the bottom and get ready to cut some more notches. There's a lot of notches in whittling. 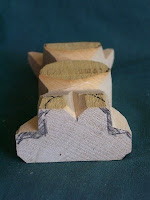 Cut out most of the blackened areas, but leave a little for the final cleanup. That's really the majority of the work on this little guy. He's not done yet, but the rough work is complete. We've got the basic parts proportioned, what's left is the details. I'm not sure how this one will look when it's done. There's still a bunch of room to adjust the shape and size of the feet, shape of the legs- will he he be knock kneed? Double jointed? Will he have knees at all?. Will he have a neck? What shape will his eyes & nose take? I woodburned most facial features on the ones I've finished, and have only whittled the last couple. 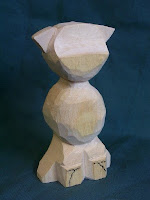 Here he is, same point as above. 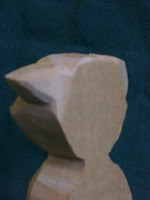 Little guy is flat backed, meant to stand up against a wall or similar. I only shape the ears from the back, and run a little bevel aroung his outline.

There he is, done (below). Eyes, nose and mouth are pretty simple, he's a simple piece and I feel like complex features would be out of place (just my opinion) . Last pic shows the four reindeer I can actually round up, the washed out guy on the left is the one in this blog. Just a little sampling of the different things you can do, feet, legs faces ears a little different on each. One on the right (only doe in the herd) is made of rosewood, probably Narra judging by the amount of silica in the wood. She was brutal to carve and required a lot of honing. 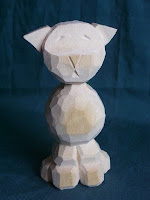 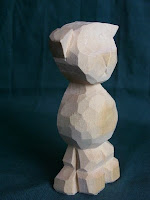 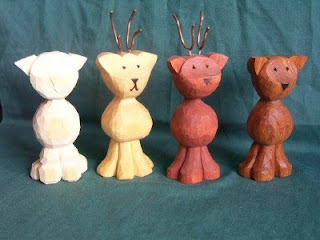