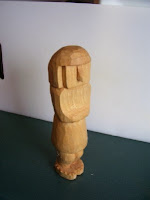 Hey out there, cabin fever setting in here in the frozen north. My house looks like a cabin with all the construction, but I won't lie, I'm totally urban.

Nothing remains from my earliest days whittling except my memories, and the second knife I ever had. I have no recollection of the fate of my first knife, the second one has been sharpened so may times the blade is probably half the size it was and is pretty far out of shape.
Here's a pic of the first thing I whittled when I started up again, he's based on the Kachina dolls made by the southwest Native Americans. To date he has exhibited no magical powers. Basswood, 2" x 2" x 10" more or less. He stands in the south facing bay window in my kitchen, among the houseplants. He originally had hands; they were ugly and were removed. Use your imagination.Finish is two or three coats of Tung oil. 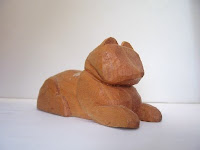 SphinxCat here was next, a piece of willow rescued from
the wood pile. Willow may be soft for a hardwood but it
is a lot harder than basswood. At the time I did this I was not yet able to put a truly sharp edge on my knives. I was also using a knife given me by Mom- a good knife sure, but not great. The blade was too long and too wide, if I had been inclined to add more detail it would have been difficult
with that knife. SphinxCat lives over the sink at the moment, guarding the dish soap and watching dishes dry.
(well, he'd watch if he had eyes). Finish is also multiple coats of Tung oil- it's readily available, easy to apply and you can stop at one application or build to a shine. Just make sure the previous coat is dry, and remember that later coats take longer to dry since they cannot soak into the wood as well as the first.

This is the knife I'm talking about- made in USA by RA Murphy Co. Carbon steel blade, not very expensive. Mine has a 3-1/2" blade, they make two smaller, I'll try the 1-3/4" size one day. Good steel, nice fat handle- in fact this is the handle I patterned my leather wrapped knives after. The only other thing I whittled with it is a blade cover, sorry no pic.
Posted by BfloBif at 7:43 PM